The Nebraska Death Index for 1904-1968 is now online for free public use at NebraskaDeathIndex.com. Records for 1904-1955 are currently only available in image format, scanned from oversize books created by the state many years ago, while records for 1956-1968 are in a searchable text database.

Greetings from Reclaim The Records! We’re your favorite little non-profit organization that picks fights with government agencies, archives, and libraries for better public access to genealogical records and historical materials. And we’re back in your mailbox today to announce that we recently won and just released more free records, this time from the Midwest.

Introducing the first-ever publication of the Nebraska Death Index, now online for free public use at the artfully-named NebraskaDeathIndex.com! 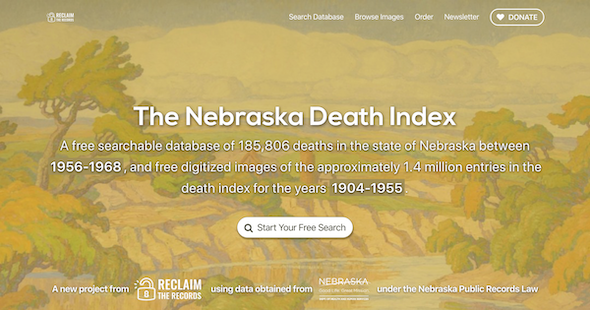 Here’s why we did it

Earlier this year, one of our board members was noodling around with some Nebraska genealogical research, and he was surprised to realize that there was no source to search for Nebraska deaths. Statewide vital records registration began in Nebraska in late 1904, so their Department of Health certainly had records going back to the early 20th century, but there was no way to search through the index of what they had.

And while recent death records in Nebraska are closed to the public for fifty years, anybody can purchase a copy of an older record. That’s all fine and dandy, but how are researchers supposed to know what records exist if there isn’t any index anywhere? There wasn’t even any data source available to researchers at a physical location within the state of Nebraska.

And here’s how we did it

In May 2019, citing Nebraska’s Public Records Law, Reclaim The Records made a request for “a copy of the Nebraska Death Index and/or finding aid to deaths, from its onset to 1968”. You can read the whole request on our website (PDF), if you want, because we like making all our correspondence and court cases public.

Nebraska’s law requires agencies to respond within four business days, which to their credit their Department of Health and Human Services did. Unsurprisingly, they initially rejected our public records request — we’ve often found that’s a thing that many Departments of Health like to do, at least right up until the point when we show up with our lawyers. But somewhat more surprisingly, Nebraska DHSS also denied that they even had an index for their state death records. And they helpfully added that death records can only be obtained upon the payment of a statutory fee by entitled parties. While this was true, it was not entirely relevant, because look, we only wanted the index.

This Nebraska Public Records Act denial was received by e-mail just as our board member running the project was waiting to board a flight to Vietnam. Fearing a loss of momentum, he managed to create and submit our formal Public Records Act appeal to the requisite authority within an hour, just as he was lining up to board his flight.

In Nebraska, the state Attorney General is able to issue binding rulings about public records requests. So our board member forwarded all the online correspondence to the AG’s office, and requested that they adjudicate the situation. Within about two weeks, they had gotten back to us, and behind the scenes, the Nebraska Attorney General’s Office had been able to negotiate with the Department of Health and Human Services to amend their response to our request. Another win for Reclaim The Records!

In other words, we didn’t get this state death index online through glad-handing or pleading or making backroom deals for records digitization in a secret no-bid contract with a Department of Health, which is a thing some other groups might do *cough*. Instead, we got the records released by using the law and not taking No for an answer.

So after the Attorney General dealt with them, the Nebraska Department of Health and Human Services caved to our request. They conceded that yes, a state death index does exist (like, duh), and that yes, we could have a copy, upon payment. And they provided us various options for how to reproduce it.

Nebraska DHSS told us that the section of the death index covering 1904-1955 was only available in a printed series of eleven oversize books, each about 800 pages in length. This data must have been originally typed into some long-antiquated database to result in such a product, but unfortunately, the only format that had survived to 2019 were the books. The original data must have flown away to punch-card heaven.

This left us with the need to scan the pages of these large-format books and put the images online. So that’s what we did. We at Reclaim The Records paid the state of Nebraska a little over $2,000 to send all the index books to their State Digitization Center, who needed about four months to scan the entire series. (The original estimate was more like $9,000, but to our happy surprise they came in significantly under budget.) They did a great job, and the quality of the scans is very good. Here’s a sample image:

There are some abbreviations added next to some of the names, like “In O” for “infant of”,”S/B” for “stillborn”, and “Sis” for Sister, meaning a nun. There are also multiple handwritten markings in red ink on the pages of the books, sometimes notating dates in the 1960’s through the 1980’s. We’re not sure what those mean, but as a guess, it might be a date that someone had requested a copy of a certificate.

All of the entries in the death index give at least a year of death, the two digits in the far-right column, but maybe only about 15% of the entries have the full date of death, more commonly in the entries for the late 1940’s and 1950’s.

Finally, the good news is that every entry in these books also gives a two digit numeric code for the county of death — but the bad news is that we have not yet found a key to tell us which number matches up with which Nebraska county. We’re still asking around, though, and will mention it in a future newsletter if we find one.

We presume that within a year or two, all of our favorite genealogical websites will have created some kind of transcribed and text-seachable version of this data. But for now, if you’re looking for a 1904-1955 death, you’ll need to check these images.

Meanwhile, the index for Nebraska deaths from 1956-1968 was already in a text database format. (Hooray!) The Department of Health warned us that the database quality was not perfect, but they said that they could either send us the data as-is for about $33 or that we could have the state verify and clean up all the data for an additional $194,000, if we wanted…?

(You can probably guess which option we chose.)

The database has fields for Given Name, Middle Initial, Surname, Date of Death, County of Death, and State File Number. And while you can search this data on our new NebraskaDeathIndex.com website, you can also download the underlying CSV file, if you really prefer doing genealogy-by-spreadsheet. We like sharing data! 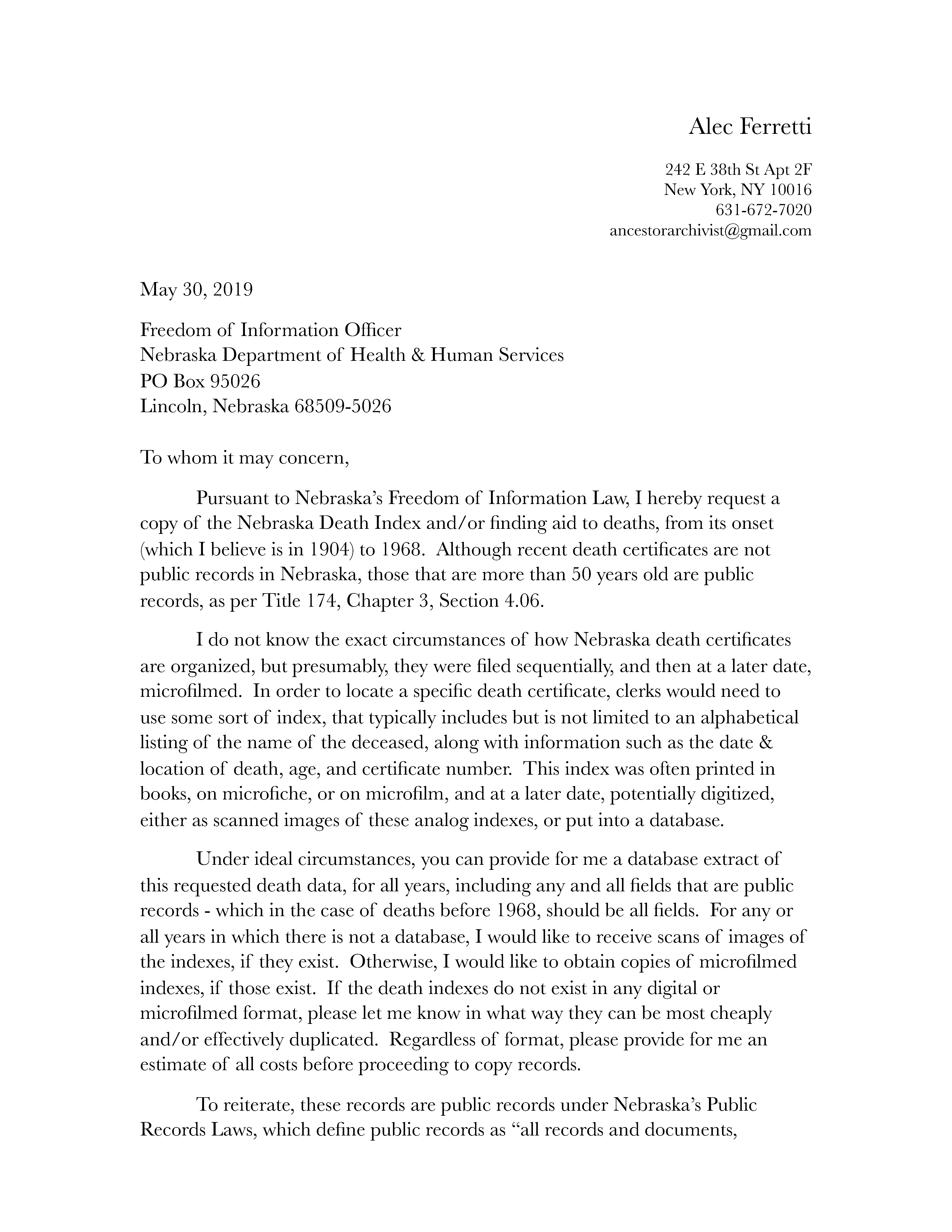 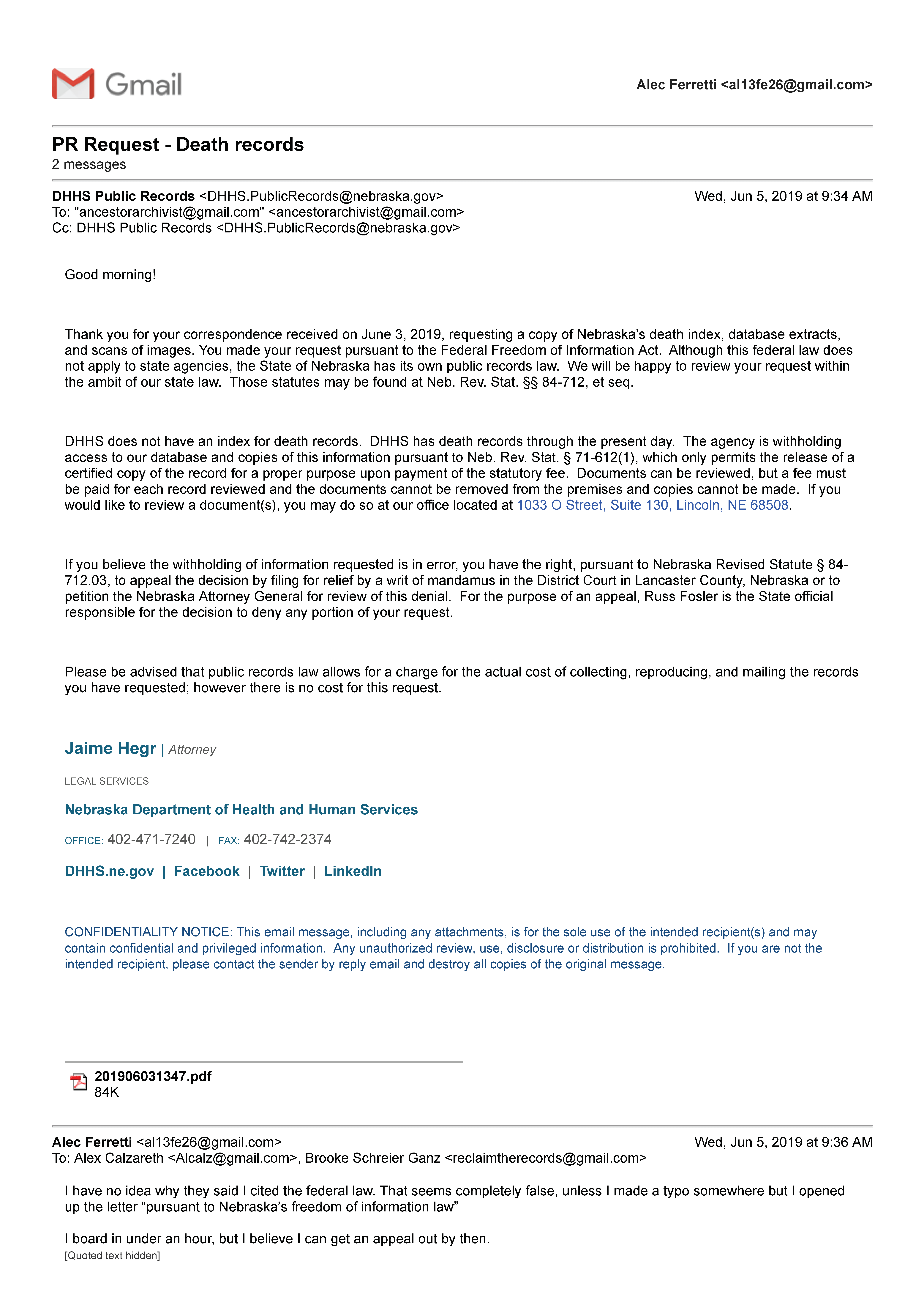 The state not only denied our records request, they even insisted that they didn't have a death index at all. 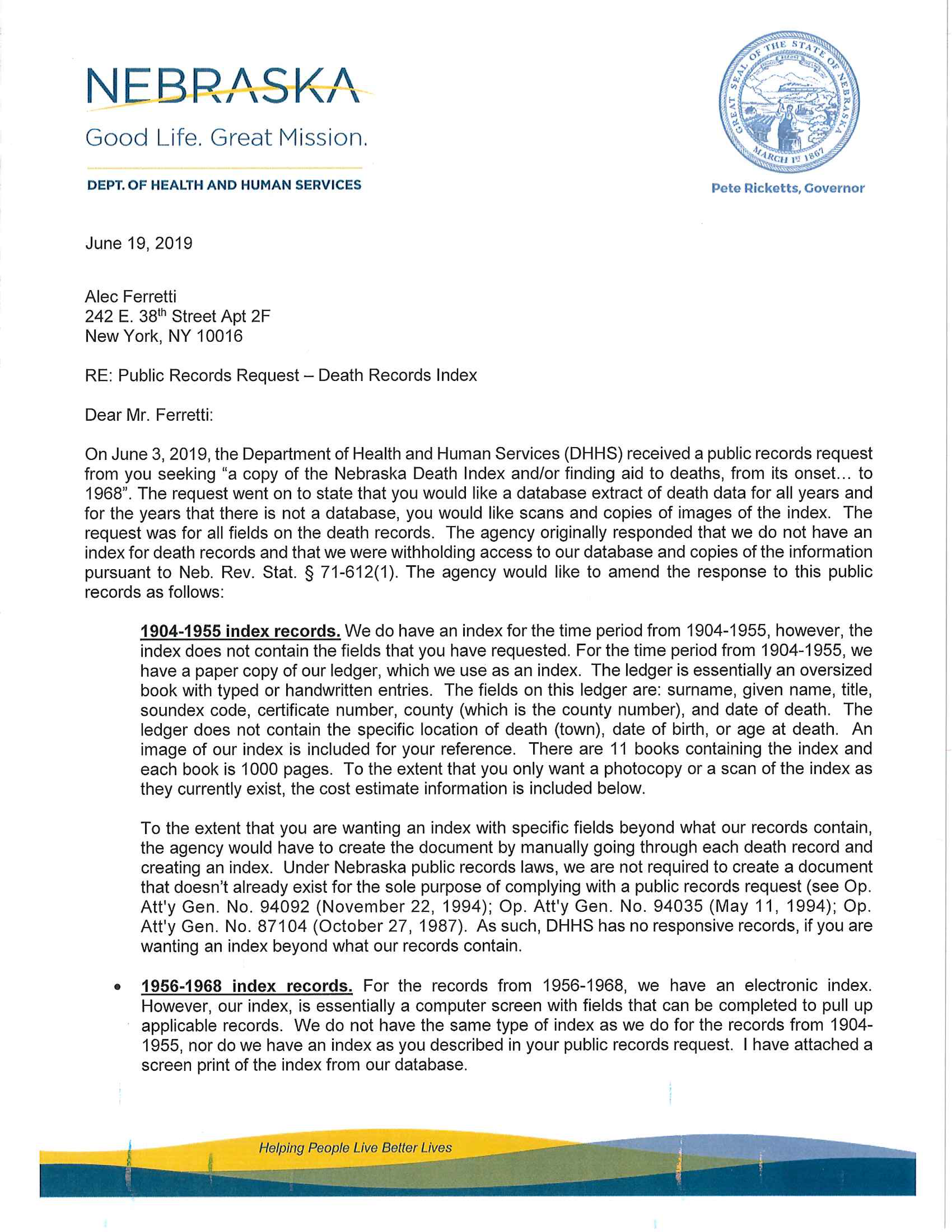 After getting a talking-to by the Nebraska Attorney General's Office, DHSS accepted our request and gave us a list of options for how to acquire the records

Approval of Appeal from the Nebraska Attorney General's Office (June 20, 2019) 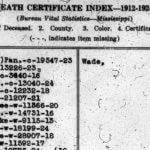 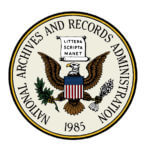