A Freedom of Information lawsuit for these records is in progress

We filed a Freedom of Information Act (FOIA) lawsuit against the U.S. Department of Veterans Affairs in US District Court, Southern District of New York (SDNY), on September 17, 2018. The case is still pending.

Three weeks later, on October 10, 2018, the VA responded to our attorney, not in a lawsuit response but in a letter, saying that the agency had suddenly remanded our request to their FOIA Officer for “further consideration, appropriate processing, and the issuance of a subsequent IAD”. This letter was conveniently dated September 13, 2018, four days before our lawsuit had been filed. No explanation was given by the VA as to why they had not produced this letter nor their plans for “reconsideration” prior to our suing them. ?

In September 2017, Reclaim The Records made a Freedom of Information Act (FOIA) request for a copy of what is colloquially called the BIRLS File from the United States Department of Veterans Affairs. This is a Veterans Benefits Administration database that provides information on deceased individuals including name, birth and death dates, branch of service, and enlistment and release dates. This request was one of the first two FOIA requests our organization had ever made for a nationwide database under the federal FOIA, rather than a state-level law such as a state Sunshine Law.

Our original request was filed through the MuckRock website:

To Whom It May Concern:

This is a request under the Freedom of Information Act.

I represent a 501(c)(3) non-profit organization called Reclaim The Records. We are an activist group of genealogists, historians, journalists, and open government advocates who acquire genealogical and archival data sets and images from government sources, often through the use of Freedom of Information laws. We then upload those records to the Internet, making them freely available to the public and returning them to the public domain.

We request a copy of the Beneficiary Identification Records Locator Subsystem (BIRLS) Death File, a very large database maintained by your agency. This data has already been made available to the public before, and it is currently online at at least two major commercial genealogy websites, Ancestry.com and Fold3.com. We are now requesting a copy for our organization, so that we may post it online for free public use.

We would also like to recommend that your agency upload a copy of the file to the federal government’s open data portal, data.gov.

Based on this scanned “Request for Records Disposition Authority” document, located at archives.gov…

…it seems that the BIRLS Death File has the VA Item Number 08-065 000, and a copy may have already been turned over to the National Archives and Records Administration (NARA).

We request that this file be turned over to us in database format, as it already exists in a database. We would like to receive it on a portable USB drive, and we are willing to pay the costs for purchasing that drive and for its insured and trackable domestic shipping, as well as any fees associated with fulfilling this request. Please inform us of all fees in advance of fulfilling our order.

Thank you for your consideration, and we look forward to your timely response within twenty business days, as the statute requires.

The request was originally rejected by the VA for privacy reasons on April 6, 2018 (PDF). But after our attorney contacted the agency, they wrote us a new letter on April 26, 2018 (PDF) where they said they would be referring the issue on for further study in a different department, rather than closing the request.

On July 26, 2018, the VA wrote again, denying the records for the second time (PDF). This time, they claimed to us that the BIRLS database had been “erroneously” been released to Ancestry.com on March 18, 2011 pursuant to FOIA request number 10-02722-F, and that they didn’t want to release the data to us, too. They also claimed that this BIRLS database release amounted to “a data breach of Veteran’s personal information” — which seems rather unlikely given that everyone in the database is, by definition, dead.

And so, on August 6, 2018 we appealed the second denial (PDF), for much the same reasons as we had the first denial. We did not get a response.

On September 17, 2018, Reclaim The Records sued the US Department of Veterans Affairs in US District Court (SDNY) for the BIRLS Database. The case is still pending.

Then three weeks later, on October 10, 2018, the VA suddenly reached out to our attorney by e-mail with a new response letter. The letter said that the VA had suddenly “remanded back” the case to their FOIA officer for “further consideration, appropriate processing, and the issuance of a subsequent IAD” — and this “oops, our bad!” letter was very conveniently dated September 13, four days before the FOIA lawsuit was filed. ?

Our lawsuit continues, and we look forward to winning the first free public release of this important database about veterans. 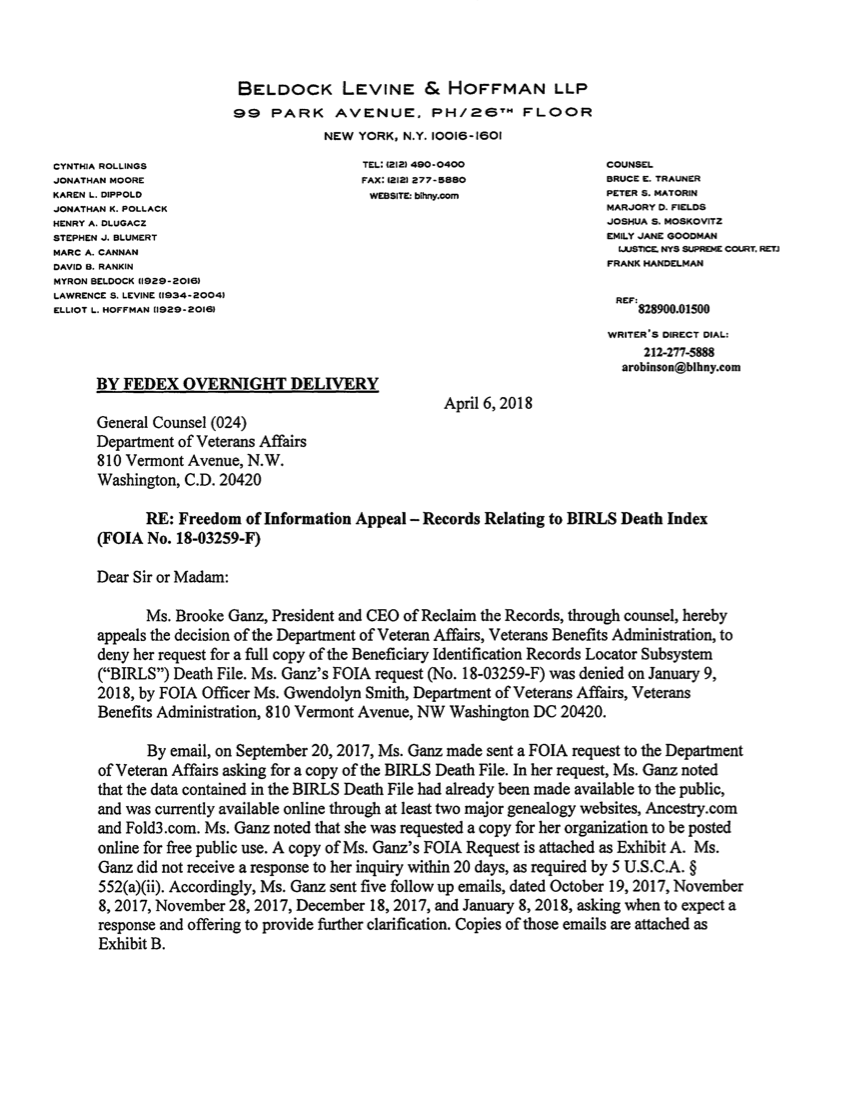 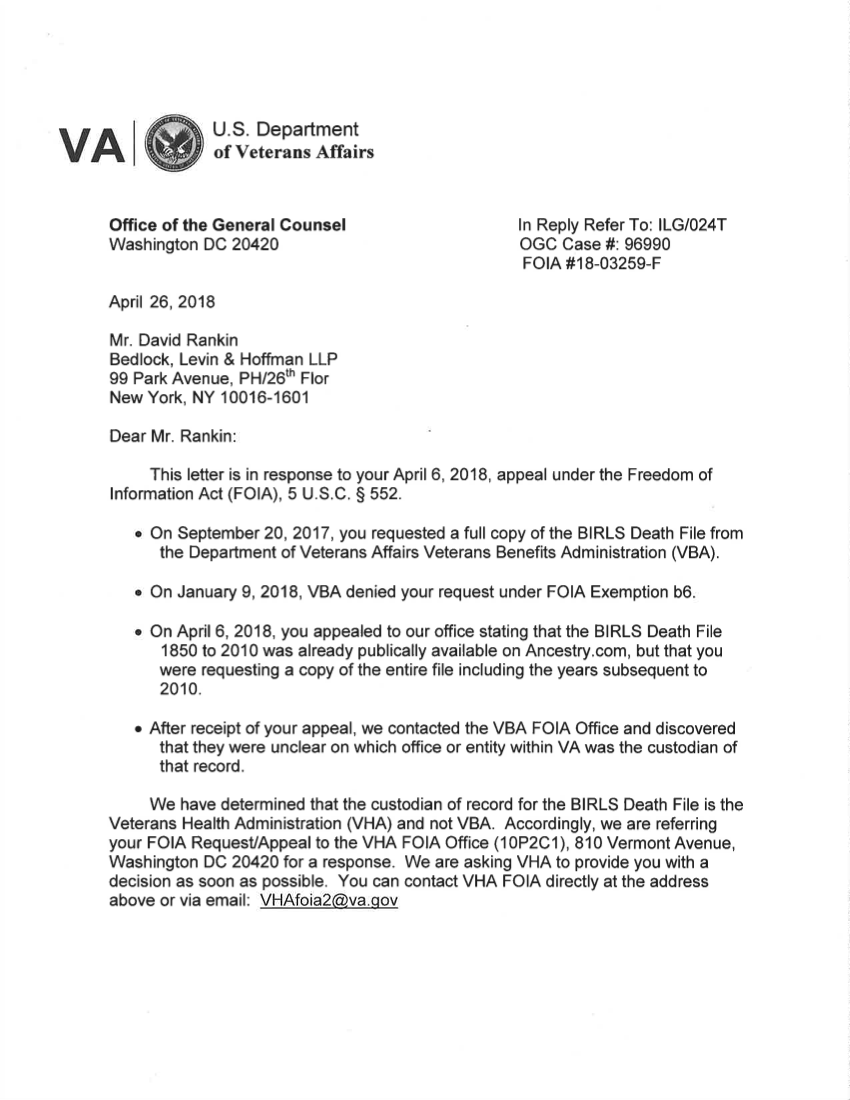 After receiving our FOIA Appeal, the VA suddenly decided that they had sent the FOIA to the wrong agency, and redirected it to a different group. 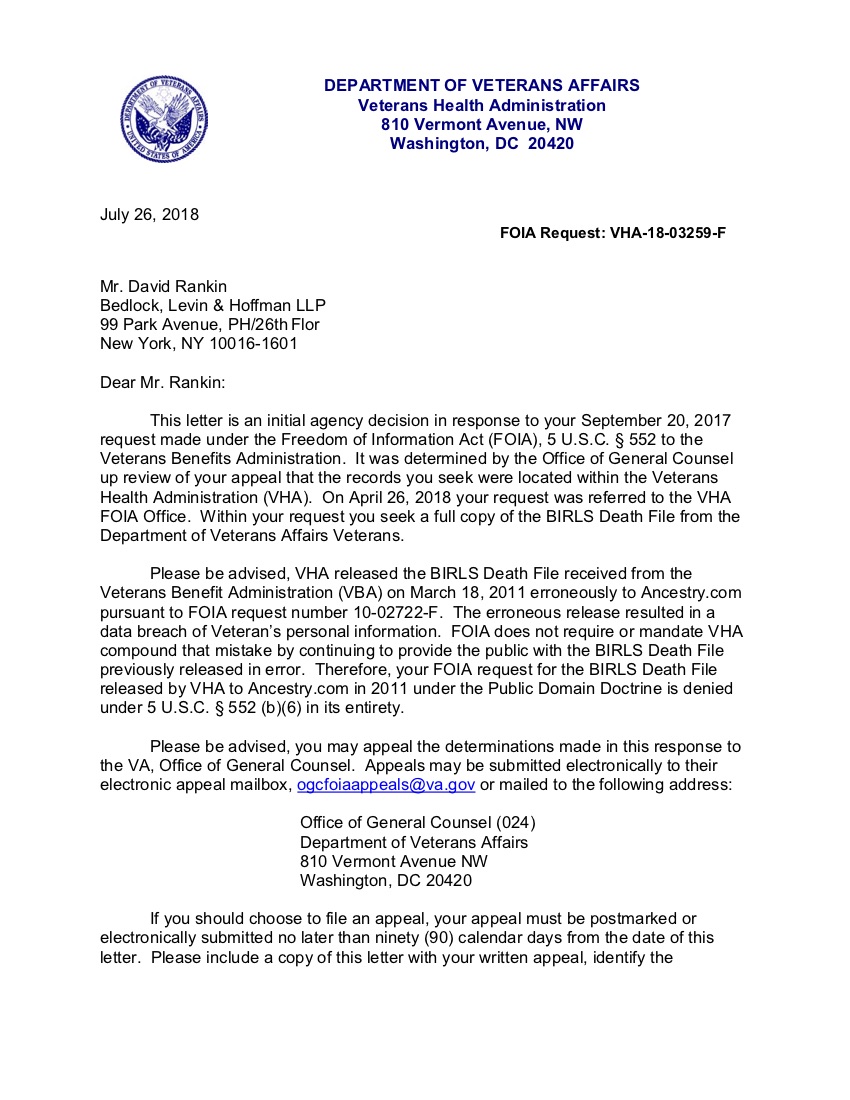 After finally shuffling the FOIA request to the right sub-group, the VA denied our FOIA, saying that the earlier BIRLS database had been released to Ancestry.com in error 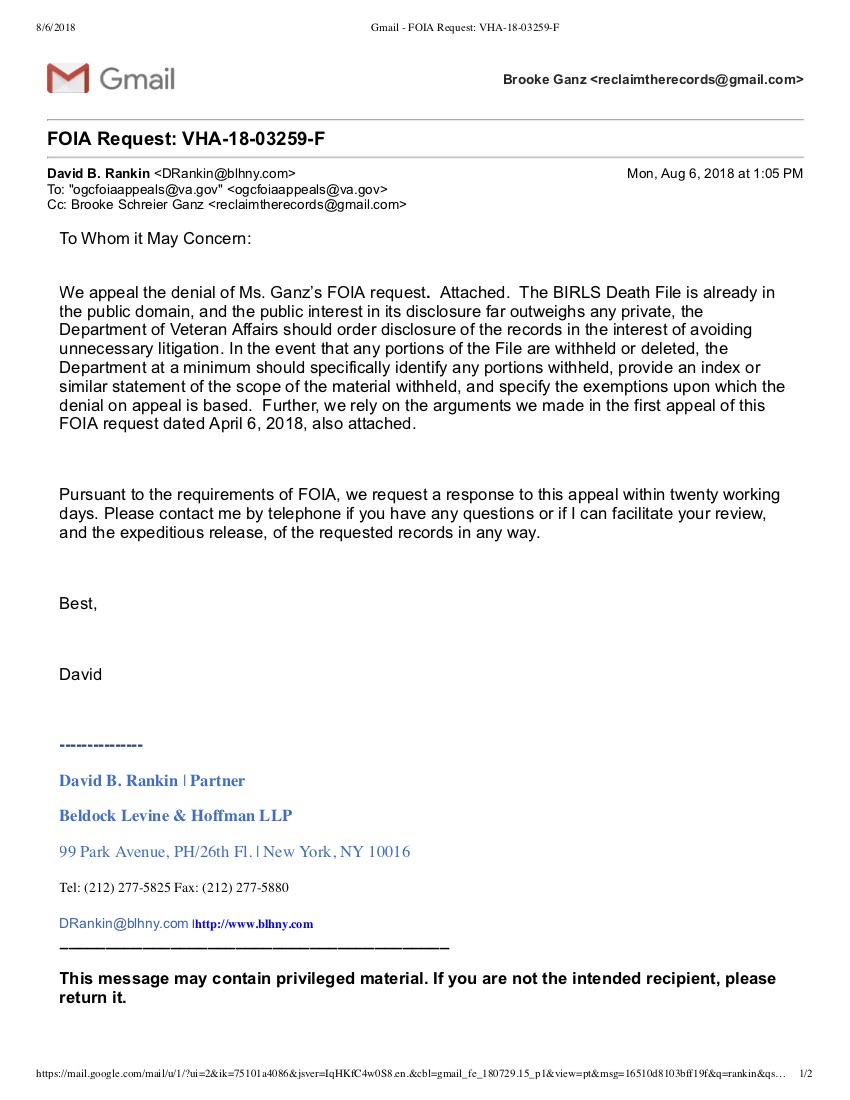 We appealed the second denial, too. 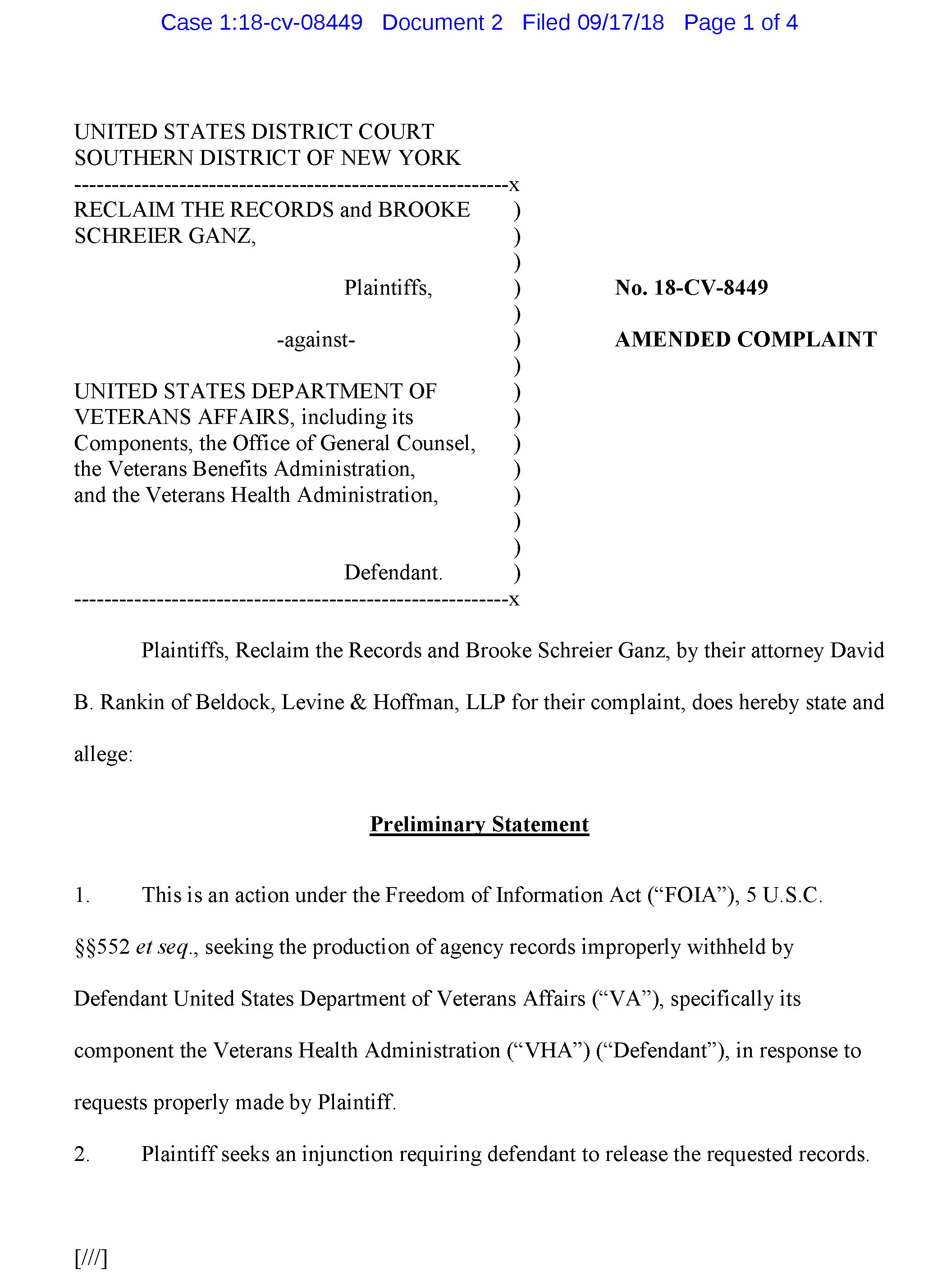 Reclaim The Records vs. US Veterans Affairs 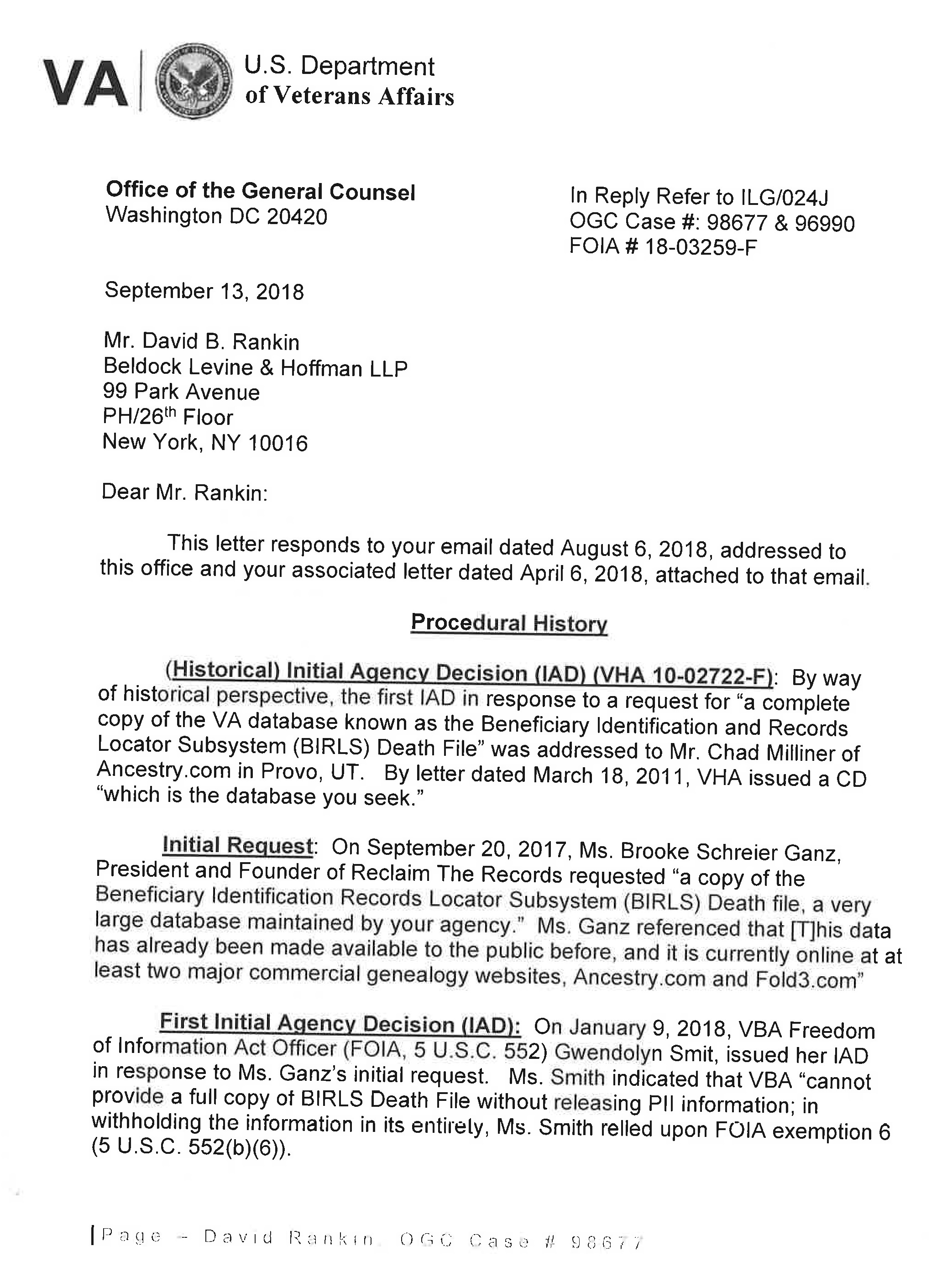 Response to FOIA lawsuit from the VA

On October 10, 2018 -- three weeks after the FOIA lawsuit was filed in court -- the VA suddenly responded to our attorney with a letter dated (backdated?) to September 13, saying they would reconsider their previous denial and remand the case to their FOIA officer for more discussion

#OurAncestors A1: Part of the problem is the late-20th century 'privacy hole' where records aren't available unless you have boots on the ground in NYC. Big props to @ReclaimTheRecs for making indexes available. https://archive.org/details/reclaimtherecords

Yeah, we know we were kind of quiet on Twitter in January, but it's only cause we just filed our first lawsuit of the year against an archive, and we didn't want to raise our voices too loudly in their reading room. 💅

Tickets for this year's #FOIAFest are now on sale!

Want a panel on housing? We have one. Immigration? Yep. Policing, education, project collabs, organizing, the gang database, labor? All of them!

It's three days of virtual FOIA fun, what's not to love? https://headlineclub.org/foia-fest/

I recently received a #FOIA response that included this line and just...wow.

FWIW, I wasn't planning on falsifying any information before, but now I am absolutely going to falsify the fuck out of that information.

There is a photograph in my house that haunts me. It is 100 years old. I don’t really need to look at it anymore because I have memorized every detail. But look at it I do. It is safely in my cupboard of photographs because I fear it might dissolve away in the vulgar light.

It would be great if it happened organically, but in reality we are likely going to have to sue, sue, sue — just as we’ve been doing for years. We have not heard about any proactive plans to make things better for public access. So, we fight on.

Hey @ReclaimTheRecs, can you weigh in on possible access changes to federal records of genealogical interest under the new administration?

~ RELEASE THE KRAKEN! ~Reclaim The Records is once again taking on the New York City Department of Records – Municipal Archives, but this time we’re asking for ALLLLL THEIR RECORDS. All of them. Every historical New York City birth, marriage, and death record. Every scan of an old will or deed or tax assessment list or military recruit list. Every everything! We’re going to get them and then put them all online for free, for everyone to use. No fees, no restrictions.We’re sick of the Archives’ illegal and immoral "licensing" and "permissions" con job restricting public access to historical public records. We’re mad that they’re continually ignoring the people and patrons they’re supposed to be serving.And so, we just filed a big brand new Freedom of Information Law (FOIL) request with the city, and you can read all about it here, in very copious detail:www.reclaimtherecords.org/records-request/28/Enjoy! And if you have questions, please feel free to ask in the comments below.
… See MoreSee Less

This morning, the NYC Department of Records, which is the parent agency of the New York City Municipal Archives, held a public hearing (online, of course) to discuss some horrid new "licensing" and "permission" rule changes that they’re trying to push through.Essentially, they want to force the public to ask for and receive permission from the agency to use any of the public records housed in their building — and then pay the agency for that permission, far above the costs of reproduction. They want to limit your right to re-use and re-publish every historical document, in articles or presentations or books or movies. They even want to take ownership of any new scans or new photographs you take of their records, hand over copies of the negatives to them, and then assign the rights to the new work to the City of New York.It’s all just so utterly bonkers — and illegal.And you might remember that this agency, the Municipal Archives, is the same one whose previous illegal actions restricting public records access under the New York State Freedom of Information Law (FOIL) actually spurred the formation of our organization six years ago. We’ve sued them for records access *twice* since then, both times successfully.For an overview of what their proposed licensing changes are, and why they’re so ridiculous, we recommend reading this from our friends at The New York Genealogical & Biographical Society – NYG&B, who have an excellent explainer about the issue on their website:www.newyorkfamilyhistory.org/access-alertAt this morning’s public hearing, our Reclaim The Records board member, archivist and genealogist Alec Ferretti, used his official public comment time to read the following comment into the official record. (See Image #1)And as an organization, we at Reclaim The Records submitted our slightly less lyrical official comment about their proposed rule change on the New York City rules web portal last night. (See Image #2)The Archives may not have any plans to make the public records they hold more freely available to the public, but we certainly do. We want the records back, and we want them put online — and we also want everybody who’s ever had to pay these obscene and legally unsupported licensing fees for records the Archives doesn’t even own to get their money back. It’s government grift, and we plan to stop it.Stay tuned for some big news in the coming weeks. 😉
… See MoreSee Less 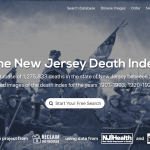