In January of 2019, Reclaim The Records obtained copies of approximately two years of the daily Microsoft Outlook calendars for several New York City employees working at the Department of Records and Information Services (DORIS). These calendars included the lists of all meetings they had taken, whether in person or by conference call or other method, and with whom.

We discovered many interesting things in these calendars, including that the Commissioner of DORIS, Pauline Toole, and several other staffers, had been having multiple meetings with the tech company Google about a previously unpublicized and unknown project. Note that DORIS is the parent agency of the New York City Municipal Archives, one of the biggest and oldest public historical and genealogical record archives in the United States.

One calendar entry referred to a meeting with Google representatives about a “research project.” Another showed a meeting between a staff attorney for DORIS and Google’s own legal department at Google’s New York office, during which they then met via videoconference with Google’s legal department in California. And there were several other mentions of a Google “agreement”. Most interestingly, in October 2017, there was an explicit mention of “Google NDA” in a calendar entry — presumably meaning a Non-Disclosure Agreement of some sort, between a New York City agency and Google, which to our knowledge, had never been disclosed to the public nor reported in the press.

Why were New York City bureaucrats signing a secret deal with Google? What was this “research agreement”? We decided to find out.

In January 2019, less than a week after we received the calendar copies, we submitted a Freedom of Information request through New York City’s OpenRecords portal, directed to DORIS. Although far more than the legally mandated twenty business days have now passed since our request, Reclaim The Records still has not received a formal response nor any records from the city, just several extensions of the projected date by which they promise to tell us more. The most recent date that DORIS has provided for a response to our request is July 25, 2019. We’ll see what turns up.

Here’s the full text of the FOIL request we sent to the city:

Title:
All DORIS agreements and communications with and/or about the Google “research project”

Description:
To Whom It May Concern:

Acting on behalf of the non-profit organization Reclaim The Records, and pursuant to the New York State Freedom of Information Law (1977 N.Y. Laws ch. 933), I hereby request the following records:

I am requesting copies of all correspondence, e-mails, proposals, drafts, notes, agreements, contracts, meetings and calendar entries, phone logs, meeting minutes, budget items, receipts, vendorization forms or data, bids, evaluation materials, Freedom of Information Law (FOIL) records requests and their associated correspondence and any appeals, and any other documentation or communications between any members of the New York City Department of Records and Information Services (DORIS) and Google, or within DORIS about Google.

To further aid in your search and records production, this request explicitly includes all materials associated with the mentions of “Google” in the official calendars of DORIS Commissioner Pauline Toole, Assistant Commissioner Ken Cobb, and DORIS attorney Lisa Velasquez, among others at DORIS, particularly those in the records management division and in the legal department. Meetings about a Google “research project” [sic] appear several times on their official calendars, as well as a “Google Agreement” [sic] and a “Google NDA” [sic] — which presumably refers to a non-disclosure agreement between DORIS and Google. (We would like to remind DORIS that NDA’s are not exempt under FOIL.)

We are requesting all of these materials for all dates between January 1, 2015 up through the date that this FOIL request is processed, inclusive.

In the event that there are fees, please inform me of the total charges in advance of fulfilling my request. I would prefer that this request be filled electronically, by e-mail attachment if available or USB hard drive if not. The requested documents will be made available to the general public, and this request is not being made for commercial purposes.

If any clarification is necessary, please feel free to e-mail me at [email protected]

Thank you in advance for your anticipated cooperation in this matter. I look forward to your response within five days, as required by the law.

Hi there, lawyers and bureaucrats of DORIS. We at Reclaim The Records originally submitted this New York State FOIL request to you, # FOIL-2019-860-00035, asking for copies of various Google-related documents, back in late January 2019. It is now late June 2019, which is far past the mandated legal deadline for responses to FOIL requests.

Your original acknowledgement of our request had an estimated reply of April 2019, which was more than twenty days out from January, and was therefore already a breach of FOIL’s timetable for response or records production. As you can see from the “note” attached to the request in this system, we protested that extension to you in late January. But you failed to reply to our note, nor give us any reason why there should be such a delay. Heck, you didn’t even give us the courtesy of providing a bad reason.

Then you extended your own FOIL reply deadline two more times, which seems like a pretty nice perk for a government agency to give itself, even if it is against the law.

In your most recent extension of your required reply, which bumped your estimated date to July 25, 2019, you wrote that it was because there’s a problem with the city’s ediscovery software vendor. However a great deal of the items we specifically mentioned in our FOIL request would also presumably be available to your agency in non-email systems and servers, such as copies of contracts or vendorization documents or receipts or meeting minutes or phone logs, etc. And yet you haven’t provided any of those non-email items yet either, not one record. Are you really claiming that all of those other types of records are wholly unavailable too?

So, we’re writing to let you know that the latest and greatest extension deadline you have set for yourself, which is July 25, 2019 at 2:00 PM, will be the final extension that we choose to accept from you. If you do not provide your reply and all of the requested documents on or before that date, we will consider this FOIL request to have been constructively denied by your agency — and we will move forward with all legal options, including a shiny new Article 78 petition and lawsuit in the Supreme Court of New York.

And since you guys, and your legal department, know very well that we at Reclaim The Records have happily and successfully sued you and won records from your agency, and from other city and state agencies, in multiple FOIL cases before, we hope you’ll recognize that we’re not bluffing here. We hope you’ll reconsider your tendency for procrastination and simply choose to follow the law, before we take you to court yet again.

Public records belong to the public, and these Google “research project” documents and your agency’s secret Google NDA are no different. Hiding or withholding public records from the public would be wrong for any city agency, but it is especially and hilariously wrong coming from the literal Department of Records.

Also, please give our best to your colleagues at Google, who are probably pressuring you guys to withhold some of these materials. And feel free to let them know that we look forward to discovering just how many other American cities have also signed these super-secret NDA’s and government agency “research projects” with their company. Maybe they should have Googled the phrase “freedom of information law” before they assumed all this could stay hidden?

Looking forward to your timely and legally mandated reply, as always.

sincerely yours,
Brooke Schreier Ganz, on behalf of Reclaim The Records
https://www.reclaimtherecords.org/

We’ll keep you updated about what we find out.

Documents related to this request are coming soon. 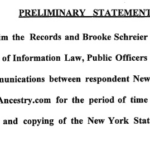 Reclaim The Records vs. New York State Department of Health